On October 22nd, Kanazawa Seiryo University, Kodolányi János University's old and beloved partner held the first Online International Talk between the universities, that was followed up with a second session on November 19th. 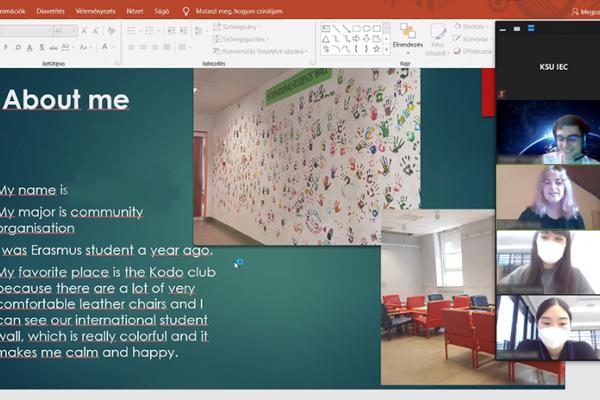 "I really appreciate the chance that the colleagues at KSU have given us. I personally am interested in Asian culture, and even as an individual human being. As a program coordinator of KJU, I found it a great possibility to meet with students from a whole different country and culture. It was interesting to see how even though we have really different cultures, habits and behaviours, we still found small parts of our lives which helped us connect with the other party, let it be through music, books or movies. Not gonna lie, it was challenging at the beginning as both parties were a bit surprised and the conversations started slow, but by the end of each session, we really warmed up and dare I say even wished we could talk longer! It really is a great experience not only to practice speaking English but to also learn listening to it spoken by a non-native speaker but also to get out of."

"This talking was via Zoom, and we were around 10 people. Every people made a slide with ppt about a little bit about themself and a PowerPoint slide of the campus life. Even if some were shy or not speaking in perfect English, everybody tried their best to understand everything. In the beginning, they were a little embarrassed, but I tried to initiate the conversation by asking questions, after that, it started to flow, and we had fun like we know each other for a long time.

I learned from that the thousands of miles don't mean anything. We are maybe like the same music, movie or food, despite our language different we are human. I really loved that talking and If I had a choice, I would definitely apply again. I met new people (they are so cute and kind), I used and improved my English skill and nobody cared about the grammar. "

We would like to thank KSU once again for this opportunity and hope we can join in next time as well!