Hungarian higher education has a long history; the first university was founded in 1367. The modern higher education system consisting of universities and colleges emerged in the 20th century. A measure of Hungary’s success in contributing to the world’s intellectual heritage is the fact that thirteen Nobel Prize winners were educated in the country. The ball-point pen, phosphorus matches, Rubik’s cube, the electric train and the telephone exchange are among the many items invented by Hungarians, and we must not forget the long list of famous composers, painters and artists, such as Zoltán Kodály, Béla Bartók, and Victor Vasarely. Read more

A successful secondary or high school-leaving examination is a prerequisite for admission. The academic programme s culminate in a Bachelor’s degree, which is the first phase in higher education in the European Higher Education Area, as accepted by the EU member states in 1999 in Bologna. The aim is to provide knowledge, useful skills and competencies focusing on practice for students in order to enhance their opportunities for employment on the job market. Graduates with a Bachelor’s degree (BA or BSc) can work after earning their degrees or they can continue their studies in the second phase of higher education, and earn a Master’s degree (MA or MSc). A PhD (or doctoral degree) is the highest degree offered by an institution of higher education. 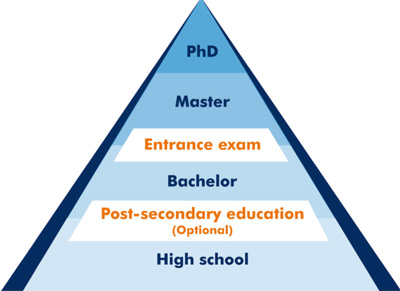 Since Hungary is a member of the European Union, Hungarian higher education institutions are part of the European Higher Education Area. Credits and degrees gained in Hungary are transferable to other European institutions. An ECTS (European Credit Transfer System) equivalent system was introduced in Hungary in September 2003 to be applied in all higher education institutions. The minimum credit number for a Bachelor’s degree is 180, for a Master’s degree it is 240, and for a doctoral degree it is 180. Read more

The main objective of the introduction of the credit system was to harmonise the education systems of the different member countries and to facilitate student mobility. As a result, higher education institutions in Europe will recognise credits earned in a Hungarian institution and vice versa.

The ECTS credit is a numerical value that is allocated to different course units. It describes the student’s workload that is required to complete the given course unit. The credit reflects the quantity of work each course requires in relation to the total quantity of work prescribed in order to complete a full year of academic study at an institution. This includes lectures, seminars, practical work, assignments, self study, exams and other assessment activities.

Grading system in Hungary and the ECTS grading scale

In the Hungarian grading system the top grade is 5 (excellent), the lowest grade is 1 (failed).
Hungarian grades and their ECTS equivalents

The academic year of higher education institutions consists of two semesters, namely the autumn and the spring semesters. The autumn semester usually lasts from the beginning of September until the end of January. The spring semester lasts from the beginning of February until the end of June. Both semesters include a 15-week term time for lectures, seminars and practical work and a 6-week examination session.

However, international degree programmes may run to a special academic calendar.